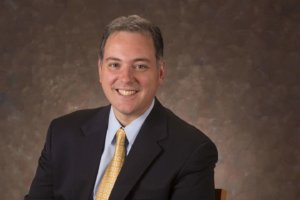 As a lifelong Western Pennsylvania native, Vincentian’s new President and CEO cites homegrown celebrities like Dan Marino and Andy Warhol among his favorites. You’d be hard pressed to find a bigger local sports fan, too.

Nick also knows healthcare – Pittsburgh healthcare, to be precise. He has spent the better part of 20 years in the healthcare industry in Pittsburgh, working most recently as administrator of UPMC’s ICU Service Center.

So what brought Nick to Vincentian?

“My Catholic faith is very important to me,” Nick says. “Because of this, I’ve felt an immediate connection with Vincentian and the Sisters’ mission. I’m eager to help carry on this rich tradition of compassionate care.” Nick earned his bachelor’s degree at Pitt and received an MBA at Point Park University. Since then, he’s served in a variety of roles with local companies including Highmark, PNC and UPMC. A recognized industry leader, Nick is already moving forward on a number of initiatives with a vision toward growth and strategic partnerships.

“The Vincentian system has remained a mainstay in Pittsburgh for many years for a reason,” Nick says. “That shared history will propel us to new heights as we forge ahead with an emphasis on teamwork, family, innovation and collaboration.”

A strong healthcare team comes together just like a winning sports team or a loving family, Nick says. It takes determination, sacrifice and vision. And, not unlike the 2016 Pittsburgh Penguins, everyone has to give their all – from the rookie goalies to the seasoned veterans. “We have important decisions and an abundance of hard work ahead of us,” Nick says. “But, as Vince Lombardi once said, ‘there is no substitute for work.’”