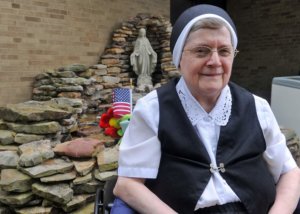 “They call me the Rock-a-thon Queen. They’re always teasing me,” said Sister Lorraine, 72, an 18-year resident of Vincentian Home in McCandless.

For six weeks before the annual “Rocking for Residents” fundraiser, Sister Lorraine sits in her wheelchair at the entrance to the home and urges visitors to make a pledge to Vincentian Collaborative System’s fundraiser.

If anyone wants to volunteer to rock with her this year to raise money, she’s game.

“When I’m done with my work, I go down there and rock for almost two hours. I take a novel with me, Mary Higgins Clark — I like her mystery books — and then I fall asleep, but I still rock,” she said.

This year’s rock-a-thon will take place from noon to 3 p.m. June 13 in the Vincentian Home in McCandless, Marian Manor in Green Tree and Vincentian de Marillac in Pittsburgh’s Stanton Heights neighborhood.

“It’s just an afternoon of spending time having fun in our homes. You can rock as long as you want,” said J. Jude Hazard, spokesman for Vincentian Collaborative System. The Catholic nonprofit group, based in McCandless, runs the three senior-living facilities.

Activities during the rock-a-thon include a singalong, a cake walk, games, prizes, refreshments, and appearances by Mr. McFeely, the Pirate Parrot, Steely McBeam and an Elvis impersonator.

Hazard said rockers range from babies held by a relative to a 100-year-old resident. Two years ago, he said, a resident fretted because she did not think she could participate.

“Don’t worry, Grandma,” Hazard recalled her grandson telling her. “I’ll rock for you.”

This year, the donations will refurbish patios and porches and beautify the gardens at Vincentian’s facilities.

A member of Sisters of Charity of Nazareth, Sister Lorraine is a retired first-grade teacher. She worked at St. Sebastian School in Ross, St. Ursula School in Hampton, the former St. Robert Bellar-mine School in East McKeesport and the former St. Michael School in Munhall.

She will solicit virtually anyone — even Bishop David Zubik of the Catholic Diocese of Pittsburgh — to support the rock-a-thon. He regularly contributes.

“Everything I do is for the use of the residents who live here,” she said.

Deborah “Debbie” Ricketts, environmental services manager for housekeeping and laundry at Vincentian de Marillac, has rocked for the charity, too. She raises cash and gifts that can be raffled. This year, she obtained an official NFL football signed by six Steelers, including Heath Miller.

“Anything I can get my hands on that I can raffle off, I’ll take it,” said Ricketts, 58, of Penn Hills. “You’ve got to know somebody who knows somebody.”

Read the Original Article written by Bill Zlatos on Triblive.com